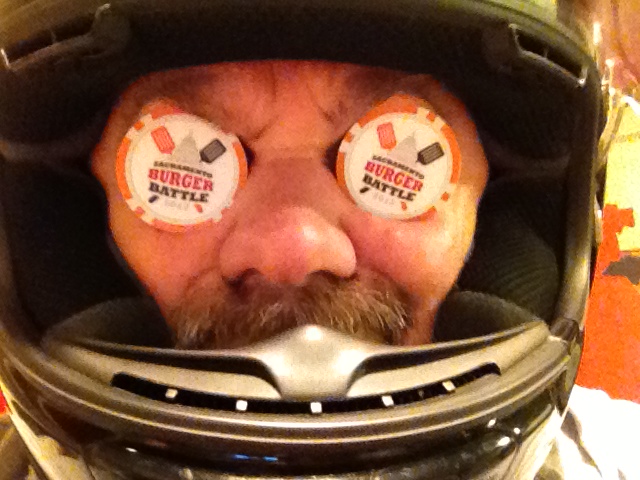 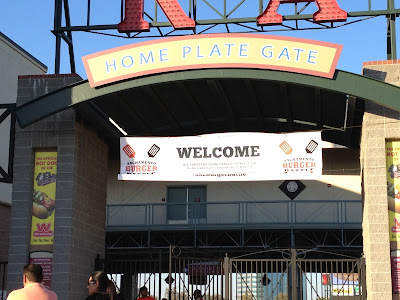 The First Annual Sacramento Burger Battle held at Raley Field on September 18, 2012 was quite a success. I was a little disappointed that the contestants were almost exclusively nicer, gourmet restaurants, but the field ensured that creativity would be common characteristic in the evening.


﻿ ﻿
With fifteen restaurants represented I had to make the tough decision which samples not to try. The first cut was to shun samples from establishments with which I was familiar. That meant Grange, Golden Bear, the Squeeze Inn, Ettore's, Flaming Grill Cafe, and Krush Burger were out. This left de Vere's Irish Pub, Restaurant Thirteen, the Eatery, Kupros Bistro, Delta King, the Chef's Table, Michelangelo's, the Porch, Shady Lady Saloon.

Since the burgers were cut into quarters that would mean I would have to eat nine quarters or two and a quarter, 1/3 pound burgers. Burp! In the end I maxed out at about 1.75 burgers-- two pounds of burger and I don't know how much more poundage in bread, cheese, bacon, tomatoes, and veggies. They should have provided dump buckets like wineries have for wine tasting events. Though it wouldn't look or smell very appetizing with people spitting out food as if throwing up.

I would like to tell my good readers that I covered the event like a tenacious reporter, asking probing questions, pissing off chefs, and providing my readership with extensive information on the event. Sorry, I just pigged out. 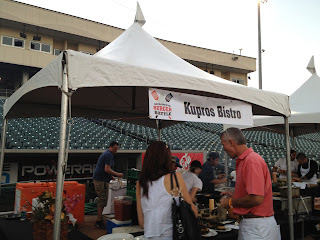 One of the first burger samples I tried was Kupros Bistro's Hoppy Pig Burger: 50/50 wild boar and kangaroo meat blend, Lagunitas Hop Stoopid beer, cheese, Kupros relish, sriracha aioli, rosemary Serrano compound, butter, on a squaw roll. It was fantastic! My wife and some friends we ran into tried this burger and no one else liked it. What is truly frustrating is the next day at work I checked out Kupros' online menu, but could not find this burger. Further digging found that that while they do feature some exotic meat for their burgers, this one a special one made for this event. Finding this out raised the question how many other contestants where making special creations just for this competition? I don't believe there is anything dishonest about this--it is a competition, but I was hoping the burgers I tasted were samples of what you could buy at the contestant's restaurant.

As stated above I didn't try the Golden Bear and the Flaming Grill Cafe's samples, but if they were as good as what they offer in their stores everybody at Raley Field must be high. I liked all of the samples that were offered, but I don't think any of them were as good as Golden Bear's perfect Juicy Lucy or any of the Flaming Grill Cafe's offerings.
﻿

If I didn't cover this like a reporter at least I added more restaurants to my list of places to scoot and eat. I believe I tried samples from de Vere's Irish Pub, Restaurant Thirteen, Kupros Bistro, the Chef's Table, however, all of the samples were good. I just don't know if these are samples of burgers that are available in their restaurants. We shall see.
The organizers promised to have a Burger Battle next year. I will be there with bells on whether Burger Scoot is around or not.